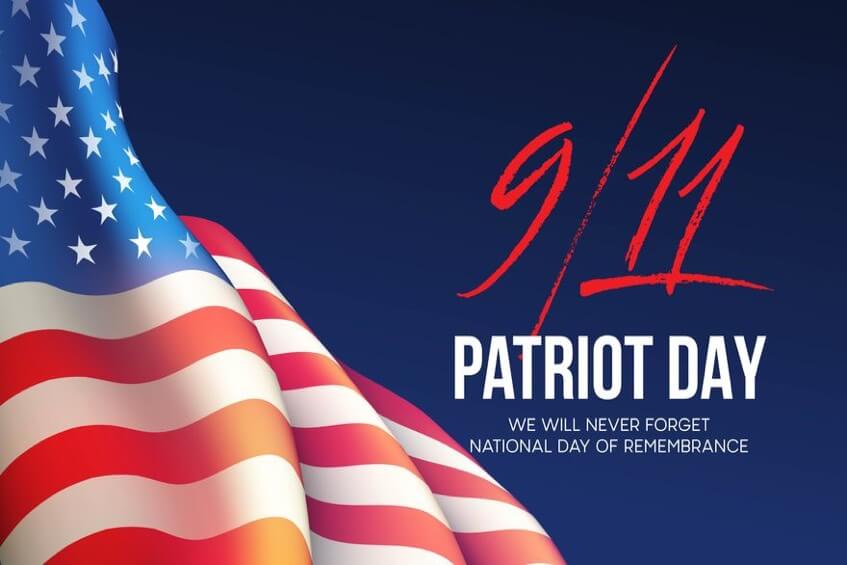 On December 18, 2001, Congress approved naming September 11 “Patriot Day” to commemorate the anniversary of the 9/11 attacks. In 2009, Congress named September 11 a National Day of Service and Remembrance.

On this day Americans across the country are called to volunteer in their local communities in tribute to the individuals lost and injured in the attacks, first responders, and the many who have risen in service to defend freedom.

The flag of the United States is flown at half-mast at the White House and on all U.S. government buildings and establishments throughout the world; Americans are also encouraged to display flags in and outside their homes. Additionally, a moment of silence is observed to correspond with the attacks, beginning at 8:46 a.m. (Eastern Daylight Time), the time the first plane, American Airlines Flight 11, struck the North Tower of the World Trade Center on September 11, 2001.

Patriot Day is not a federal holiday; schools and businesses remain open in observance of the occasion, although memorial ceremonies for the 2,977 victims (this number excludes the 19 hijackers who also perished) are often held. Volunteer and service opportunities are coordinated by the Corporation for National and Community Service.

In the days, weeks, and months following the tragedy of September 11, 2001, Americans came together to lift each other up, help communities heal, and make our country stronger. September 11th National Day of Service and Remembrance pays tribute to those we lost by recapturing our patriotic duty to serve others through volunteering and service.

As you join or organize volunteer projects in your community, use these resources to highlight the importance of this day.

An act of service is an act of patriotism.

Volunteer to honor those we lost.

To volunteer with Clear Path for Veterans New England and make a difference in your local Veteran community, please click here.

Learn the history and significance behind this National Day of Service here.

REMEMBER, EVEN A SMALL ACT OF SERVICE IS A GIANT ACT OF PATRIOTISM

In remembrance and reflection of the 9/11 tragedy we can follow the timeline and reflect on how this affected us, our military, our nation the world:

845AM A Plane hits the North Tower

On September 11, 2001, at 8:45 a.m. on a clear Tuesday morning, an American Airlines Boeing 767 loaded with 20,000 gallons of jet fuel crashed into the north tower of the World Trade Center in New York City.

The impact left a gaping, burning hole near the 80th floor of the 110-story skyscraper, instantly killing hundreds of people and trapping hundreds more in higher floors.

9:03 AM A Second Plane hits the South Tower

As the evacuation of the tower and its twin got underway, television cameras broadcasted live images of what initially appeared to be a freak accident. Then, 18 minutes after the first plane hit, a second Boeing 767—United Airlines Flight 175—appeared out of the sky, turned sharply toward the World Trade Center and sliced into the south tower near the 60th floor.

The collision caused a massive explosion that showered burning debris over surrounding buildings and onto the streets below. It immediately became clear that America was under attack.

The hijackers were Islamic terrorists from Saudi Arabia and several other Arab nations. Reportedly financed by the al Qaeda terrorist organization of Saudi fugitive Osama bin Laden, they were allegedly acting in retaliation for America’s support of Israel, its involvement in the Persian Gulf War and its continued military presence in the Middle East.

Some of the terrorists had lived in the United States for more than a year and had taken flying lessons at American commercial flight schools. Others had slipped into the country in the months before September 11 and acted as the “muscle” in the operation.

The 19 terrorists easily smuggled box-cutters and knives through security at three East Coast airports and boarded four early-morning flights bound for California, chosen because the planes were loaded with fuel for the long transcontinental journey. Soon after takeoff, the terrorists commandeered the four planes and took the controls, transforming ordinary passenger jets into guided missiles.

As millions watched the events unfolding in New York, American Airlines Flight 77 circled over downtown Washington, D.C., before crashing into the west side of the Pentagon military headquarters at 9:45 a.m.

Jet fuel from the Boeing 757 caused a devastating inferno that led to the structural collapse of a portion of the giant concrete building, which is the headquarters of the U.S. Department of Defense.

All told, 125 military personnel and civilians were killed in the Pentagon, along with all 64 people aboard the airliner.

10:10AM A 3rd Plane crashes in a field in Pennsylvania

Meanwhile, a fourth California-bound plane—United Flight 93—was hijacked about 40 minutes after leaving Newark Liberty International Airport in New Jersey. Because the plane had been delayed in taking off, passengers on board learned of events in New York and Washington via cell phone and Airfone calls to the ground.

Knowing that the aircraft was not returning to an airport as the hijackers claimed, a group of passengers and flight attendants planned an insurrection.

One of the passengers, Thomas Burnett, Jr., told his wife over the phone that “I know we’re all going to die. There’s three of us who are going to do something about it. I love you, honey.” Another passenger—Todd Beamer—was heard saying “Are you guys ready? Let’s roll” over an open line.

Sandy Bradshaw, a flight attendant, called her husband and explained that she had slipped into a galley and was filling pitchers with boiling water. Her last words to him were “Everyone’s running to first class. I’ve got to go. Bye.”

The passengers fought the four hijackers and are suspected to have attacked the cockpit with a fire extinguisher. The plane then flipped over and sped toward the ground at upwards of 500 miles per hour, crashing in a rural field near Shanksville in western Pennsylvania at 10:10 a.m.

All 44 people aboard were killed. Its intended target is not known, but theories include the White House, the U.S. Capitol, the Camp David presidential retreat in Maryland or one of several nuclear power plants along the eastern seaboard.

A total of 2,996 people were killed in the 9/11 attacks, including the 19 terrorist hijackers aboard the four airplanes. Citizens of 78 countries died in New York, Washington, D.C., and Pennsylvania.

At the World Trade Center, 2,763 died after the two planes slammed into the twin towers. That figure includes 343 firefighters and paramedics, 23 New York City police officers and 37 Port Authority police officers who were struggling to complete an evacuation of the buildings and save the office workers trapped on higher floors.

At the Pentagon, 189 people were killed, including 64 on American Airlines Flight 77, the airliner that struck the building. On Flight 93, 44 people died when the plane crash-landed in Pennsylvania.

7:00 PM The President Addresses the Nation

At 7 p.m., President George W. Bush, who was in Florida at the time of the attacks and had spent the day being shuttled around the country because of security concerns, returned to the White House.

In a reference to the eventual U.S. military response he declared, “We will make no distinction between the terrorists who committed these acts and those who harbor them.”

Operation Enduring Freedom, the American-led international effort to oust the Taliban regime in Afghanistan and destroy Osama bin Laden’s terrorist network based there, began on October 7. Within two months, U.S. forces had effectively removed the Taliban from operational power, but the war continued, as U.S. and coalition forces attempted to defeat a Taliban insurgency campaign based in neighboring Pakistan.

Osama bin Laden, the mastermind behind the September 11th attacks, remained at large until May 2, 2011, when he was finally tracked down and killed by U.S. forces at a hideout in Abbottabad, Pakistan. In June 2011, then-President Barack Obama announced the beginning of large-scale troop withdrawals from Afghanistan.

The act was followed two days later by the formation of the National Commission on Terrorist Attacks Upon the United States. The bipartisan “9/11 Commission,” as it came to be known, was charged with investigating the events that led up to September 11th. The 9/11 Commission Report was released on July 22, 2004. It named Khalid Sheikh Mohammed, the accused mastermind behind 9/11, “the principal architect of the 9/11 attacks.”

Mohammed led propaganda operations for al Qaeda from 1999-2001. He was captured on March 1, 2003 by the Central Intelligence Agency and Pakistan’s Inter-Services Intelligence and interrogated before being imprisoned in Guantanamo Bay detention camp with four other accused terrorists charged with 9/11-related war crimes. The use of torture, including waterboarding, during Khalid Sheikh Mohammed’s interrogation has received international attention. In August 2019, a U.S. military court judge in Guantánamo Bay, Cuba set a trial date for Mohammed and the other four men charged with plotting the 9/11 terrorist attacks, to begin in 2021.

After almost two decades, the tragedy of 9/11 and the resulting War on Terror, still resounds through the American consciousness and serves as a reminder of the many significant changes in society since that day. This day can be especially trying for those who were personally impacted by a loss or the resulting 19 years of war.

Please honor this day by recognizing is as the National Day of Service and give back, find some ideas on giving back by clicking here.