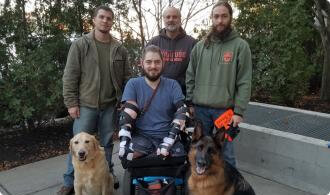 This is unique for our Dogs2Vets program; the foundation of the training conducted at Clear Path is based on an owner-trainer model. In layman’s terms, this means the owner of the dog enrolled in the program trains his/her own dog under the direct instruction of a professional trainer.

Peck was injured in 2007 during a tour in Iraq and again in 2010 during a tour in Afghanistan. He suffered multiple injuries, including a traumatic brain injury (TBI) and the loss of his legs, part of his right arm, and third-degree burns on his stomach. Because of follow-up complications from surgery, Peck had to lose his remaining left arm.

Peck, and Scott and Donna Bulger recently contacted Clear Path’s Chief Executive Officer and Co-Founder Melissa Spicer with a request to have Athena trained at our facility. Donna is the director at The Warrior Thunder Foundation, a non-profit organization dedicated to raising public awareness and charitable donations for the needs of Veterans, active duty and their families in New England.

“Scott and Donna are committed supporters of the military and Veteran communities. They have agreed to fund all of the cost associated with Athena’s training and fostering,” said Ryan Woodruff, Clear Path Dogs2Vets Trainer/Peer Support Specialist and Athena’s caretaker during Peck’s post-surgery rehabilitation. “Consistent with our mission here at Clear Path, Melissa welcomed the opportunity with open arms and quickly collaborated with our staff in order to develop a plan to arrange Athena’s training plan.”

“Since that time, Athena has made great progress in her training,” Woodruff said. “Following a recent conversation with Sgt. Peck, we were able to arrange a visit so that Athena and John could be reunited for a period of time. Athena was quick to John’s side, even after not seeing him for three months and with the addition of his recently transplanted arms.”

According to a Washington Post article published in October, Peck is thought to be the second quadruple amputee from the wars in Iraq and Afghanistan to get a double arm transplant. The 13-hour surgery was performed in August by a team at Brigham and Women’s Hospital in Boston.

Your email is safe with us.